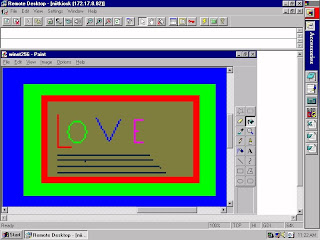 @ffolliet, @weavermiles, @sfpeaky have all been asking the same question this week (in slightly different forms and for different reasons)- how do we get our learners and colleagues engaged in communicating and collaborating on line?

Students complain they don't see why they have to use wikis, colleagues complain they don't have time to learn about all this new-fangled web 2.0 stuff.
Age doesn't seem to be a common factor as the one group are in their 20's whilst others are 40+. Usage isn't mandatory in all these cases so that's its not just that they are being awkward or rebellious, and there are fabulous role models out there with everyone from Obama to Jonathan Ross (!) on Twitter - so its obviously trendy: does the reluctance then stem from apathy? fear? lack of technological skill?

I suspect that the key has to be in the title of this blog post: learning environments are highly personal - each individual will have their own story of previous technological failure, a fear of looking stupid, experience of being criticised for getting it wrong in a new social setting (I agonised for ages about how to "retweet", for example, or whether/when to request friendships in my Ning community....)

So it may be different in every case but most conversations I have had with those reluctant to dive in seem to start with: "I just don't see the point".

And that is the point, really: people will learn to use something if there is a point to it, if they have a reason for doing so. My technophobe partner, for example, who normally avoids the internet as though it were the work of the devil, downloaded and taught himself how to use iTunes, because he is passionate about collecting music.

So one way that has been put forward is a mixture of carrot and stick perhaps: award students points for on line engagement - to make collaboration on a wiki a central part of their programme (that'll get them interested!) or make certain key information available on-line only .

But this also has to be supported with thorough training, access to the technology and exemplary modelling from the top - don't expect people to get on board if you are just waving at them from the platform..... you need to be blogging, tweeting, wiki-ing right alongside them.

Isn't use of web 2.0 just a "leadership of change" problem like any other? People will always be reluctant to embrace change unless they see it is meaningful, feel themselves supported and have a leader who is modelling the required behaviour. At least that is the conventional wisdom.

What then do we make of the Hole in the Wall experiments carried out in India by Dr Sugata Mitra? PCs with Internet access were dropped into small Indian villages without training or context and groups of children taught themselves to use them...(the adults, interestingly, made no effort to engage with them).

Finally - my personal learning story of this week. I responded to a Twitter message from a "friend" (someone I met on line through the Ning Digifolios site) who wanted a buddy to learn Spanish with. I suggested another Ning friend who had expressed a similar wish. Over the space of a couple of days the three of us set up a date and time to "meet" in a free on line classroom , accessed an on line learning programme from BBC languages and had our first somewhat chaotic lesson.

One could question the wisdom of this as a learning experience: we are none of us Spanish speakers nor particularly expert at the language.
I am English and living in Nottingham: Maria is Portuguese, from Lisbon and Natasha is Russian and was speaking from St Petersburg.

With no teacher to guide us, how can we expect to improve our Spanish language skills?

I don't know yet how this is going to turn out but I know that I did manage to practice speaking and writing, that we each took it in turn to help and correct one another from our different knowledge/skills levels and that we are as a result eager to go on learning, speaking, supporting and preparing lessons: I personally can't wait for next Thursday.

And there was something else for me about the whole experience which I reflected on later: when I was a child growing up in the 60's, I could never have imagined that an event such as this could have happened. Not just that the internet would exist and give me the ability to speak simultaneously to people in different countries, but also that one of those people would be Russian! It is perhaps because the world is constantly changing, because the change to come is unimaginable now, and because I want to be the change I want to see that I am involved in education, in the education of leaders and in on line education.

So that is the point for me.
Posted by jane@salsabaile at 10:29