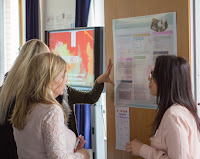 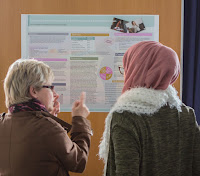 And so - it's finally been and gone. The past few weeks have been a bit of a nightmare but in the end I think we can say it was a success and definitely worth doing again.

So here's the low down - what we did and why, the outcomes, and the do's and dont's of organising an Undergraduate Research Conference.

The problem: students at Level 6 approaching their capstone dissertation show limited understanding of the basics of research methods, poor referencing skills and even worse skills in searching for appropriate literature.

The Level 4 introduction to referencing and literature searching and the Level 5 Research Methods are dismissed time and time again in students' module evaluations as boring and irrelevant. So for the past 4 years as a team we have been rethinking our approach. The problem seems to lie in students applying their skills so having an authentic assessment task at the end of the first year seemed like a possible way forward, and an undergraduate research conference that involved an audience of fellow students, teaching and support staff, local employers and colleges, seemed like a way of achieving this.

The task: students were required to produce a research poster related to a contemporary Health and Social Care issue. Students chose their own topics, worked in small groups, carrying out independent research and presented their final work as either a PowerPoint slide (templates are available in Powerpoint), as a Prezi or a Padlet wall. Independent research had to include a literature review (for the final poster) and could incorporate a small scale piece of primary research (typically a survey of fellow students or teaching staff).

As a formative task, in preparation for the final poster, students had to prepare a short presentation (5 minutes - 5/6 slides only) in which they pitched their research proposal. This was fairly structured with specific questions to be answered, including an early indication of the literature used so far. I was able to give feedback on referencing and quality of sources (see results) and used this as an opportunity to also discuss the appropriateness of proposed research methods, including ethical considerations.


The teaching methods: the module is supported by a team of teachers including our Subject Librarian (Emma Hayes) and Learning Support Coordinator (Sian Trafford), as well as a Post Graduate Researcher (Louise Griffiths).  Emma and Sian took charge of literature searching and referencing, Louise supported the students to produce an academic research poster and I taught a basic introduction to research methodology. The module is taught in the Scale Up classroom which really lends itself to interactive, group based activities, so traditional lecturing was kept to a minimum. Emma really livened up a potentially rather dull area by employing Socrative for competitive team quizzes on referencing and Padlet was used regularly to capture groups' ideas. As the task was group based, Scale Up (with round tables for up to 9 students and laptops available) makes the ideal environment for students to get on with tasks in class, with tutor support on hand. Sessions are typically 40% teacher input (mini lectures, tutorial support and directed activities) and 60% independent project work.


The results: The great thing about having a formative task mid-way through the process is that it allowed us to see what was going well and what the students were not quite grasping. Looking at the group presentations, it was clear that the messages about using good quality resources was not going in and many references were to news media (the Daily Mail ranked high in the list of publications!) and digest websites such as Psychology Today. In a tragic case of mis-timing I gave students the feedback on the same day they were asked to complete their module evaluations, so you can imagine how that went.... Whilst the proposals were imaginative and dealt with relevant issues, the level of research skills was not particularly great. Here are the stats for this particular criterion:

Adjusting the remaining teaching sessions, we went over literature search techniques, evaluation of sources and referencing once again and insisted that a short literature review of at least 3 peer reviewed articles be included in the final poster.


This time, we saw a real improvement:

The week before the conference, I ran a drop in session in which students were given detailed feedback on their posters and the winning submissions for the conference were announced. This session saw a lot of smiling faces - even those who hadn't been selected were really pleased with their results, as in the majority if cases they had seen an improvement in their grades.

Poster themes were very varied including several on mental health - one looked at Bipolar Disorder  in Children, another at Men and Depression; one contrasted postnatal depression in British White and British Pakistani women and 2 dealt with students and mental health. Men as Victims of Domestic Abuse, Elder Abuse, Workplace Bullying, Child Protection and Fostering were other topics studied.

For the conference, we simply selected the posters with the highest grades. The idea was to have visitors voting on their favourites and to award prizes for the three best -  best poster by college students, best undergraduate and best overall.


The conference: We were fortunate in having the support of our excellent Schools Outreach and Marketing teams to help with the logistics. We also had a ready made venue (our normal Scale Up classroom was big enough for the modest numbers proposed providing sufficient display space for the posters, as well as suitable seating arrangements for the discussion groups and presentations).

The half day event included short talks on post graduate research and careers in health and social care (giving our students an idea of what they can aim for) and discussion groups on independent learning and research skills (this latter session hosted by a 2nd year student, Sarah Swanwick) to help first year students think about their progression on the course and to give Year 12 students from local colleges an idea of what study at University is all about.

These sessions all evaluated really well. Undergraduates tended to prefer the session on independent learning whilst the college students were most interested in the talk on careers. Other interesting feedback from the college students was that they came to the event not having considered this as a degree subject (even though they were all studying a Health and Social Care A level or BTEC award), tending rather to think in terms of a nursing or social work qualification, but they ended the day having far greater insight into available careers in the field and even considering applying for this course!

For the college students, the highlight of the event was meeting current undergraduates and teaching staff whilst our undergraduates enjoyed looking at one another's posters best of all. They were also interested to meet teaching staff they had not yet encountered (those who teach primarily on the 3rd year dissertation module came along to vote in the best poster competition) and at least one of our first year students has acquired a work placement with the local health and social care organisation that was represented on the day.


The final verdict and some notes to self: The hardest part of the whole conference was getting people there. Timing was tricky - we could not run the event any earlier because of the assignment deadlines (set for the last week of Term 2), but as it fell after Easter, it clashed with mock exams in colleges which reduced the participation from that quarter. Some of our third year students had originally asked if they could be involved running discussion groups in order to get feedback they needed for a project evaluation but pulled out at the last minute (one less than 8 hours before!) when they suddenly realised this was the week their final dissertation was due to be submitted.....

Most disappointing was that three groups who had had their posters selected for the final conference and competition did not send any representatives on the day. Interestingly these were also the only groups that had submitted Prezis, so with no one at their displays to press the buttons and talk visitors through their work, they were largely ignored and attracted only a handful of votes in each case.

I don't really know how to solve these problems. With a bigger venue and budget and more support from the rest of the course team, I think this could become a display of ALL posters (about 30 in total). With potentially 150 students involved, drop outs would be less of an issue. As for the college students - we had applications from 20 but only 8 made it on the day - starting recruitment earlier and providing more support to the colleges could help, but timing is probably still likely to be an issue.

For those who came, it was definitely worthwhile: staff were impressed at the quality of the work, our local authority visitors were really engaged talking to students and delighted to have been invited, those students who turned up gave us a big thumbs up in their satisfaction ratings (yes - much better than the module evaluation!!) and the poster competition and presentation of small prizes and certificates made for a great celebration of their efforts.

The next step is to try and bring this level of engagement into the second year module.  I would like to have both years involved in the same event, perhaps as part of a summative assessment task. And eventually all 3 years.  My hope is that this becomes part of our normal academic year, with conversations about research theory and practice between all students and staff seen as both a normal part of teaching and learning and also something to occasionally get excited about.


Posted by jane@salsabaile at 12:53 No comments: