Three years ago I started out trying to define a PLE or Personal Learning Environment, with the production of this Prezi


Yesterday I received an email from the co-organisers of the 3rd PLE Conference in Aveiro and Melbourne asking me to produce a short video in response to these questions:

1. What is your personal digital learning environment and how do you use it?
2. What are the main obstacles for building and maintaining a Personal Digital Learning Environment?
3. How has your use of technologies changed in the last five years?
4. what are your views on the PLE vs VLE debate? is the VLE really dead?

My video response - a fairly off the cuff one - can be found here: http://www.youtube.com/watch?v=SMv1ePJLWJo

But today I have been thinking about these questions a bit more deeply.

I gave as an example of my PLE the tools and networks I use to help me learn Spanish. These now mainly centre around iphone apps such as a Spanish-English Dictionary and El Pais; fortnightly conversation with my Spanish tutor via Skype; an online language  learning community called busuu.com and my Twitter and Google+ networks which include many Spanish speakers (and writers). I would also include Spanish language podcasts (and accompanying transcripts which I access on my iphone using a "files" app).

It was interesting to look back at the tools I was using 3,4,5 years ago and realise I no longer use Delicious or Netvibes to collate links and bookmark information, instead I rely on the powerful search and "memory" tools built in to Google Chrome and my Windows 7 desktop, and store everything of value that I need to carry around in DropBox.

Before it became a pay to use site I was an big advocate of Ning for creating online educational collaborative communities, now I would normally go to Google+ to hang out, catch up and share.

I find it hard to think of obstacles to developing a PLE that are technology based. The difficulties come through people's reluctance to engage. This is a hindrance to me in trying to promote the notion of a PLE with my students - even the young, eager "digital residents" seem not to equate learning with technology and social networks as I discovered earlier this year.  In my cyber networks I inhabit a slightly unreal self selected universe populated by geeks and fans of technology, eager to try out new ideas, sharing experiences, inviting me to join in, play and learn; in the physical world I work in, it is more of an uphill struggle.

Is the VLE dead - well, clearly not. Next week I am going - at my University's invitation and expense, to a massive conference in San Diego organised by (and in the promotion of)  the providers of our VLE platform. I will be learning the innermost secrets of the VLE and how to make it sexy and attractive to students and staff alike. I will be blogging from San Diego on the experience so stay tuned.

In the meantime I remain skeptical. If I compare just two elements of my Spanish learning journey, using only a screen shot, you will maybe get the picture (forgive the pun!) 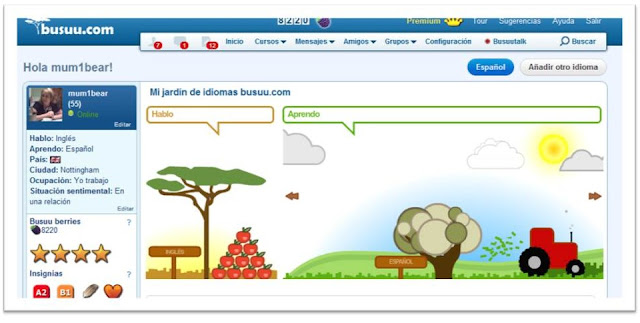 The first picture is from my institutional VLE where I studied a Spanish course a couple of years ago. It lists the tasks and links to resources week by week. The second is from Busuu.com which is an informal free site (there are premium options) which put me in touch with Spanish speakers in various parts of the world and which is entirely based on peer to peer learning (English speakers correct learners of English from other countries, and vice versa). Both are forms of VLE if you like and both are tools within my PLE, but the difference is in how each invites user engagement and the extent of interaction with a wider network. The VLE is not dead yet and it may never quite die, but closed systems, whilst they may survive, also become outdated and moribund because they  lack the interaction with the wider world which is essential for them to evolve.