I would recommend anyone with a passing interest in the Internet, e-learning, social networking - or even anyone with kids! - to take a look at this three part series.

I found it fascinating to understand the origins of the Internet and of the world wide web (and to understand the difference between the two) - and this in turn helped to explain something of the anti-authority, collaborative culture of the web.

The programme - and the website - also take a look at the generational differences in web-usage and there is an online test you can take to discover more about your web habits - which also contributes to research on the subject. I found out I was a web Bear 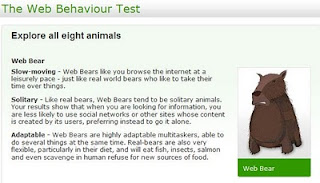 This could be a really useful test to offer new e-learning students as a way of understanding their own preferences and behaviours on line, and for e-tutors to assess the potential pace of an online activity....

However, I digress: the web behaviour test aims to provide data on what is happening to our brains as we surf, multi task, etc and to compare different age-groups' behaviours. I am looking forward to hearing about the results.

In the meantime, the programme explored myths and fears about the Internet (wheeling out Susan Greenfield- inevitably) but was equally optimistic about its potential benefits: for example, many South Korean children are afflicted by a new disease of Internet addiction but the country also has outstanding school results (South Korea was cited as the "most wired" country in the world).

The programmes have certainly made me think about my own web behaviours, the connections I make there, the "reality" of on line friendships, the authority, or otherwise of information to be found (Wikipedia was discussed) but also what all of this is going to mean for succeeding generations. Those of us who have come late in life to the web have a particular view of it based on our own paradigms of learning, knowledge, connection, etc. Those born with the web as their natural environment will inevitably be growing up immersed in entirely new paradigms.

This isn't necessarily the nightmare scenario that Greenfield suggests (infantilising etc). I think that inevitably there are difficulties and dangers involved in web use but we are in the learning and developing stage of a new-ish tool: our children, their children, may actually grow to be far more adept at managing not just the technology but also their online identities and relationships than we can currently envisage.

I always remember an edition of Radio 4's "The Long View" discussing video games that compared our current fears about their growth with 18th century moralist's horror at the vogue for reading novels.

It is unthinkable now that we would attempt to stop our kids from reading, but the Baroness Greenfields of the day were advocating just such remedies if parents were to save their children from intellectual and physical laziness, moral turpitude and a life immersed in unhealthy fantasy.....

something to ponder on!
Posted by jane@salsabaile at 14:01