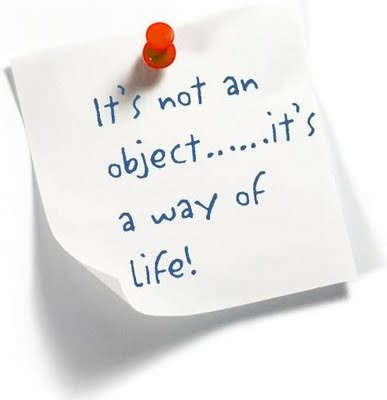 I promised @nlafferty that I would blog a little about the Prezi process and share some tips for speeding it up a little: I spent MUCH longer creating the prezi than a powerpoint, but mainly because I had to go through a big learning curve too.

Tip #1: create a story board too and rough out a design: I actually decided on the circular frames and created something on paper which allowed me to decide where I wanted to group certain ideas first.

Tip #2: think visuals first. I think Prezi is so preeminently a visual thing, the last thing you want or need is a lot of words or God forbid! bullet points... Also there is no "layering" or "ordering" on Prezi, so what goes down first is on the bottom. Put in visuals then add text on top.

Tip #3: I actually created visuals on Powerpoint first - eg found Flickr images or Clipart photos with lots of white space around them; saved the slides as separate JPEGs then uploaded to Prezi, so the image appears to emerge from the white background with no frame. Where the image was on a background, I used Powerpoint formatting to put it in a frame, added a shadow or reflection and then cropped it tightly so that it would appear to be a photo pinned to the Prezi canvas.

Note: the visuals - sourcing, converting, formatting and editing - was the most labour intensive part of the exercise. I have kept a folder of all the images used so I can re-cycle when necessary!

Tip #4 I tried to avoid motion sickness (!!) by not having too many extreme zooms, changes of direction or big panning effects. Grouping things fairly close together and making gentle moves at slight angles for the most part, big effects once in a while to jazz things up or change topic.

Tip#5 Learn from others: look at the show-cased prezis and work out how they did them; watch some of the tutorial videos. I was inspired by @adamread 's lovely prezi on designing posters.

Tip #6 Take your time! I found myself stealing an hour here and there, whilst watching TV or sitting in a hotel room during a few days working in Scotland recently, to actually work on the Prezi. It became frankly a bit addictive. I also found it a very rewarding and creative experience - I absolutely loved working with the visuals and finessing the layout.
Tip #7 STOP when it' s done: This is not a good medium for anyone of a slightly Obssessive Compulsive tendency (like me) - a point comes where you have to say, hey this is good enough!

If any one would has their own favourite tips to share, please add them in the comments below.
Posted by jane@salsabaile at 13:50